Have you noticed anything new on WordPress.org lately? I have.

Right smack on the front page there is a new ad for a MarketPlace that is 100% GPL compliant, well, at least what I like to call WordPress GPL Compliant. And yes, there is a distinction, but that’s a story for another day. 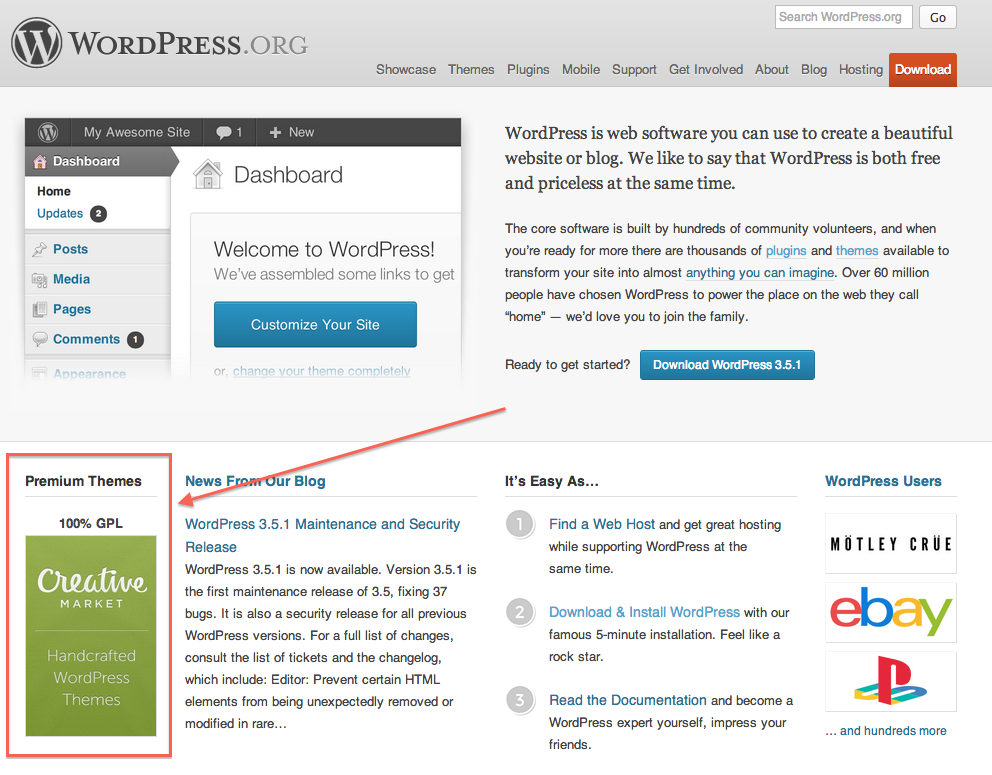 I actually meant to write about this, last week I think, when I first saw signs of stink unfolding on the #dramapress train (courtesy of Brad) and got consumed with life. This evening it came up again on our favorite show, DradCast, in which Matt Mullenweg co-hosted the show with the two banditos we love to hate and hate to love – Brad and Dre. You can catch the full show here.

But Back to the Point…

As for the promotion, kudos to .org for doing what they promised they would.

I actually had a conversation with Matt a while back, specifically when all the stink kicked off with Jake being denied the right to speak at a WordCamp because he was selling his themes on ThemeForest.

One part of the conversation started with, hey why wouldn’t .org create a market place so that these authors could get their themes up and in turn be compliant with the WordPress GPL guidance. Good discussion came from that, but hey, .org doesn’t want to be in that business. Being a business owner I get that. Running support can be a real pain, let alone the costs associated etc. and besides it’s not their responsibility for a marketplace.

The second part, is more relevant. Would .org help a 100% compliant MarketPlace if it came into the market? Absolutely!! That was the response. Unbeknownst to me, it appears that it was already in the works, a few months later boom, there you have it.

Well I’ll be damned… ain’t that some shite…

If you’re wondering, consider the reach.. more to come on that..

Who the heck do they think they are?

Now tempers have flared again. Not by the theme authors that were originally upset. Oh no, now it’s the theme companies who see it as an unfair competitive advantage. Now, all of a sudden, no one cares about the original issue that was getting poor Jake booted from speaking at Camps. More importantly, giving Jake and all the other theme authors that are going at it alone a suitable solution that allows them to make money and still be in compliance. Nah, that wasn’t the focus.

Instead, many would have it that the real focus was to dominate the WordPress theme business. Keep everyone from making money. Off with everyone’s head!!! We shall dominate, and you shall fail. Yes, that was a more reasonable explanation for this absurd gesture by WordPress.org, specifically Automattic and Matt is too blame because he hates all business.

Did I get that right?

Yeah, no, you’re all smoking some good reefer, likely spiked with some crank.

Having talked about this directly with Matt, I know first hand that this was intentionally done with one goal in mind.

To give all freelance theme authors a place that they can openly share their themes while being in compliance with the WordCamp guidelines and being able to earn.

But why should .org support this you ask? Simple, without the support how do you expect our dear Jake to make money? The reality is that any new MarketPlace today, that is trying to compete is going to have a hard time differentiating themselves from the saturated market. The conglomerates make it impossible, they have done an exceptional job taking ownership of the domain and kudos to them. This unfortunately puts these authors in a precarious situation. They have to earn, they have to make money, they have to support their families. So how do you propose they do that?

Sure we can take the approach, fuck that, I’m in it for me. Or you can do what .org has done. Realize their market reach, understand that with great power comes responsibility, and knowing, that while some will be upset, many others will benefit. I bet those themes authors that were upset before are pretty happy about a marketplace that has equal if not more coverage.

Is it unfair? Sure, I guess. Will you live? Yup, you sure will. Want a piece of the action? Create a 100% GPL compliant MarketPlace. Boom, just like that you’ll be in there like a fat kid on cake.

As for you Matt, this is what I have to say:

You were absolutely right on today’s podcast. You have to make decisions, and don’t shy back, .org is your playground. Just because it’s 10 years old now and there are big companies in the space doesn’t mean you have to change anything.

Cheers, your Mexican brother from another mother!!!

Still love all you crazy fools.. but don’t make me pull out my pimp hand..