On September 28th, 2018, Facebook announced it’s biggest data breach to date. They estimated 50 million accounts were affected at the time of the disclosure. Subsequent to the disclosure, security professionals from all verticals took to the interwebs to provide what most would consider sensible advise:

Neither, however, would offer users an appropriate response to this type of data breach. This knee jerk reaction speaks to a bigger problem we have in our community of misinformation, often as a result of our own lack of understanding of a problem.

//Indubitably, a great deal of paranoid and otherwise irresponsible misinformation about the Kennedy assassination has traveled far and sold well …

This post will analyze the details that have been publicly shared. It will highlight why, when I was asked, my response to users was, “Nothing. Do nothing. Nothing you do will help you mitigate or prevent this specific type of data breach. If you were forced to log out, assume your account was possibly affected.”

How Many People Were Affected

The latest report has the total affected divided into two distinct cohorts:

The 30 million affected were divided into three cohorts defined by the type of data stolen:

The attackers were able to daisy chain three specific bugs that allowed them to abuse the “View As” feature. The “View As” feature allows you to check how another user might see your post; this is used by folks that apply specific controls and rules to their profile (e.g., Maybe I don’t want everyone to see private photos, or maybe I want to restrict how co-workers can see my pictures, etc…). This view as feature was a great way to confirm the settings were right. This feature has been removed since the breach.

The attackers exploited the first 400k cohort, then laterally moved into the accounts of friends. As they viewed the accounts of the 400k they were able to steal the access tokens for any of the friends associated with the accounts originally exploited. This is how it ballooned to 30M different users.

First: View As is a privacy feature that lets people see what their own profile looks like to someone else. View As should be a view-only interface. However, for one type of composer (the box that lets you post content to Facebook) — specifically the version that enables people to wish their friends happy birthday — View As incorrectly provided the opportunity to post a video.

Second: A new version of our video uploader (the interface that would be presented as a result of the first bug), introduced in July 2017, incorrectly generated an access token that had the permissions of the Facebook mobile app.

Third: When the video uploader appeared as part of View As, it generated the access token not for you as the viewer, but for the user that you were looking up.

Leveraging these three bugs the attacker was able to steal what is known as an “access tokens.” These access tokens are not your username, or passwords.

An access token is an opaque string that identifies a user, app, or Page and can be used by the app to make graph API calls. The token includes information about when the token will expire and which app generated the token. Because of privacy checks, the majority of API calls on Facebook need to include an access token. – Facebook Access Tokens

Think of when you’re interacting with a social platform. Think of the number of times you have to log in over a 30 days period. The odds are, if you are using the same browser, not often. This is facilitated by Facebook via their access tokens.

What Can You Do As a User?

Nothing. There is little we can do in this situation.

The only possible response was made on our behalf by Facebook:

To protect people’s accounts, we’ve fixed the vulnerability. We have also reset the access tokens of the almost 50 million accounts we know were affected and we’ve also taken the precautionary step of resetting access tokens for another 40 million accounts that have been subject to a View As look-up in the last year. Finally, we’ve temporarily turned off the View As feature while we conduct a thorough security review. – Facebook

This action alone fixed the problem – addressing the vulnerability and the users actions. By resetting the access tokens it forced anyone that, they thought, might have been affected to log back in (i.e., their access tokens were deleted). 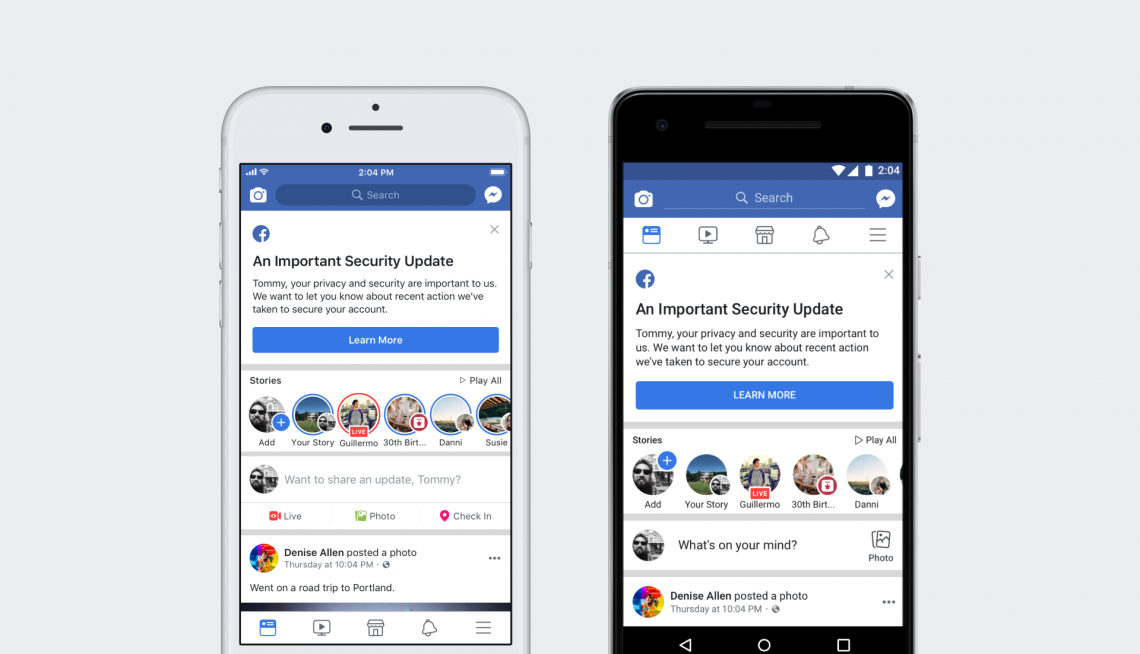 This is the alert you can expect to see logging back in after your tokens were removed. (Facebook)

If we move beyond the unfortunate event of the breach itself, there is much to be said for the speed at which an organization like Facebook was able to respond and contain the exposure. In many ways, the impressiveness and success can be attributed to the implementation of a token-based authentication mechanism.

If nothing else, this shows the power of using tokens for app auth instead of passwords.

They can simply invalidate the tokens and people log back in to re-authenticate their apps etc… much better than passwords being breached. Kudos on them for quick action.

Needless to say, the purpose of this article isn’t to speak against the importance of strong credentials or employment of 2FA. It is, however, meant to understand this breach while also highlighting why it’s so important that we do not just pass information until we have a better grasp of the specifics.

As always, if you feel I misrepresented any of the facts, let me know.