I am fascinated by the move because I believe it to be an obvious impact to the Managed WordPress ecosystem.  In the interest of full disclosure, I work in the security division for one of the largest Managed WordPress hosts – GoDaddy – via my affiliation with Sucuri.

The Implications are Gravest to Hosts

If you’re anyone but a host, the impacts will likely revolve around “confusion” when speaking to the difference between .com and .org, an issue that has plagued the community for as long as the two entities have co-existed. This move only compounds the problem further.

One interesting observation from my buddy Scott is that it introduces a new channel (i.e., new opportunity) for plugin and theme developers. That’s actually a very astute observation, and while the specifics of how it’d work are unclear I would wager that there is some truth to that sentiment.

The biggest impacts however are likely to be towards those hosting companies that have invested resources (both people and dollars) into creating a vibrant Managed WordPress hosting business ecosystem. Long are the days when the market was defined by Page.ly (the first Managed WordPress Hosting provider – that’s for you Josh) and WPEngine. Today I would consider the space to be saturated, with more flavors of Managed WordPress than ice cream at a Baskin-Robbins.

If you think about it in terms of economics, I would say that the Managed WordPress market structure is one of Perfect Competition these days.

With a perfect competition market, think Fast Food; it’s best for the consumer as there isn’t much pricing power. On the opposite extreme, with a Monopoly there is a lot of pricing power, think utility companies.

Automattic’s release was very careful not to mention Managed WordPress, but the latest change makes it so.

They are probably 2 / 3 years too late, but the move makes a lot of sense. If you think about it from Automattic’s perspective, for years they’ve likely been losing customers as they grow and require more flexibility. The minute a customer wanted more flexibility, facilitated through the extension of themes and plugins, they would have to find their own host provider; they introduced their own churn and handicapped their Life Time Value (LTV) by not recognizing their real potential (i.e., I could only imagine that to be a loss of opportunity).

What are the Implications?

If you’re a Host that’s invested in Managed WordPress there are a few things to consider:

While not impossible, we rarely see manufacturer get into the same business as their distributors or retail partners. That’s because it can create a lot of unwanted, unplanned for, unintended secondary consequences. via @chrislema

The most obvious is that there is a new entrant in the space. They not only have a very large acquisition channel (i.e., think of the millions of website owners currently hosting on .com, even if only half are real sites) but they also introduce a new supplier into the quickly saturating market.

The real question is whether Demand is exceeding the ability for the Suppliers to offer services. If it is, then you could argue that the market has plenty of room for a new entrant. If it’s not, then that means that the market is either a) at the same size or b) shrinking, which in turn would mean that it’s getting even more crowded and in return the opportunity is shrinking. The net result will inevitably be the smaller players being gobbled up by the bigger players as a move to dominate market share and positioning.

You also want to consider the impacts of a new entrant in your specific market. If you too are targeting that sweet spot of $20 / month, you’re undoubtedly targeting the same market segment.

The biggest unfair advantage is similar to those shared by other service providers in the confusion that is introduced by the relationships at the highest levels between the Foundation and Automattic. Looking at past behaviors, it’s only safe to assume that it won’t be long before we start seeing mention within .org which could be perceived to be a very big breach of trust in the community.

A perfect example is to look at the “Features Plugins” list on the current .org repository: 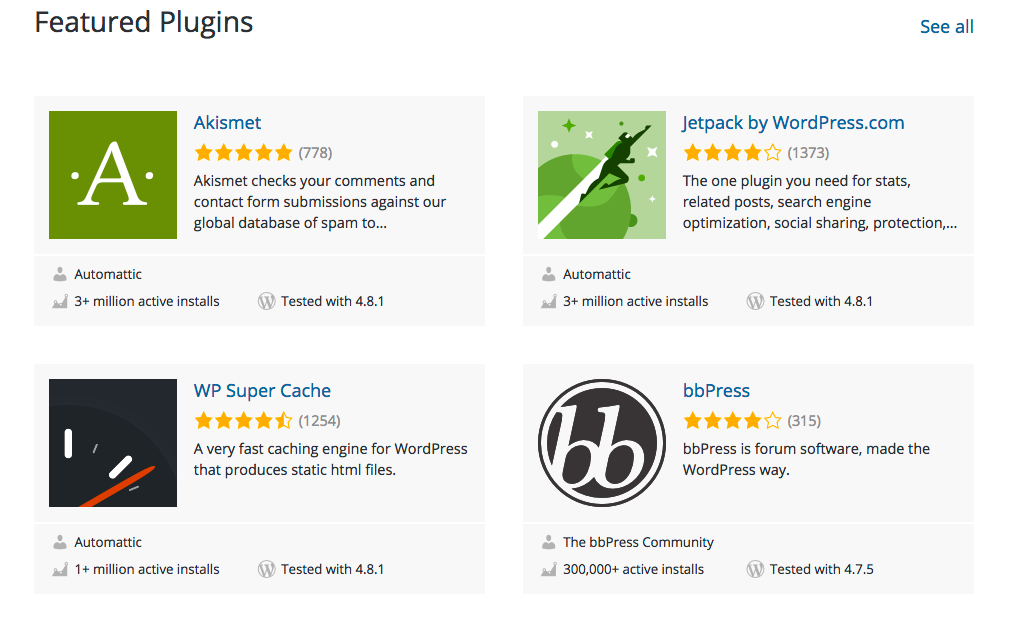 Each are plugins by, or supported by, Automattic.

There is also this perception that .com is the source of truth when it comes to all things WordPress, right or wrong is not for me to say, but from a marketing / sales perspective I can tell you that it further complicates the conversations agents will be having.

3. The Negative Impacts to Partnerships

For years JetPack has been the tip of the spear for Automattic. They have worked feverishly to make it rich with useful features and services, while simultaneously using their position to partner and integrate deeper with other hosts. The general idea was to bring the .com experience to those that aren’t on .com.

What happens with all these relationships now? Will hosts be as supportive of integrations like JetPack? Will hosts start to get spooked by Automatic’s positioning and market penetration? And if they did, what does that mean for the greater WordPress ecosystem? If you think about the backbone as it pertains to revenue, hosts are perhaps the largest contributors to the platforms continued growth. Not meant to discount the value of community and it’s contributors, but there is no denying that a lot of the growth the market has enjoyed has been facilitated by the infusion of capital, awareness and resources by hosting providers.

The good news is that like with most things large companies do, the impacts are never as great as we might fear them to be. Let’s also recognize the undeniable fact that large companies have a natural tendency to suck when they try to be masters of all things. There will be a natural market shift, but things will settle. I have seen this happen in multiple industries, including WordPress. Most of us can recall the knee jerk reaction when forms were introduced, or even when they purchased BruteProtect and made it free via JetPack. Thankfully, those markets didn’t disappear, but in many ways thrived.

The bigger question that keeps finding it’s way into my head are the many moves Automattic is, and has been, making over the years. What does it means for WordPress in 5 years?