To think I was not going to attend the event.

It was already later in the year, November, and besides, as my beloved friend Chris Lema pointed out, I had been rejected to speak.

Forgive @perezbox and his tweets. He got a rejection letter from #wooconf without even applying to speak.

I didn’t even get my name in the hello.

So mind you, once I got over the butt hurt and mustered up the cojones to attend I found myself to be very happy. It’s all good, my rejection streak began with WordCamp San Francisco.. #thestruggleisreal

Besides, a trip to San Francisco is always in the cards, even if it’s a week after WCSF…

State of the Woo

It was pretty awesome to see Mark Forrester take the stage and talk about the journey WooThemes has been through. He quickly walked us through their history, starting as a theme shop and how they morphed into e-commerce platform, specifically how WooCommerce exploded and they allowed the business to follow suit. Enough that the community was large enough to warrant an event like WooConf, and enough to support WooCommerce meetups.

How fascinating is that!!

As the business owner of a private company, I could not imagine putting our skin in the game to put on an event. I got my feet wet a few years back organizing WordCamp San Diego and it’s definitely no small task, especially when you’re on the hook for everything, especially the economics of such an undertaking. 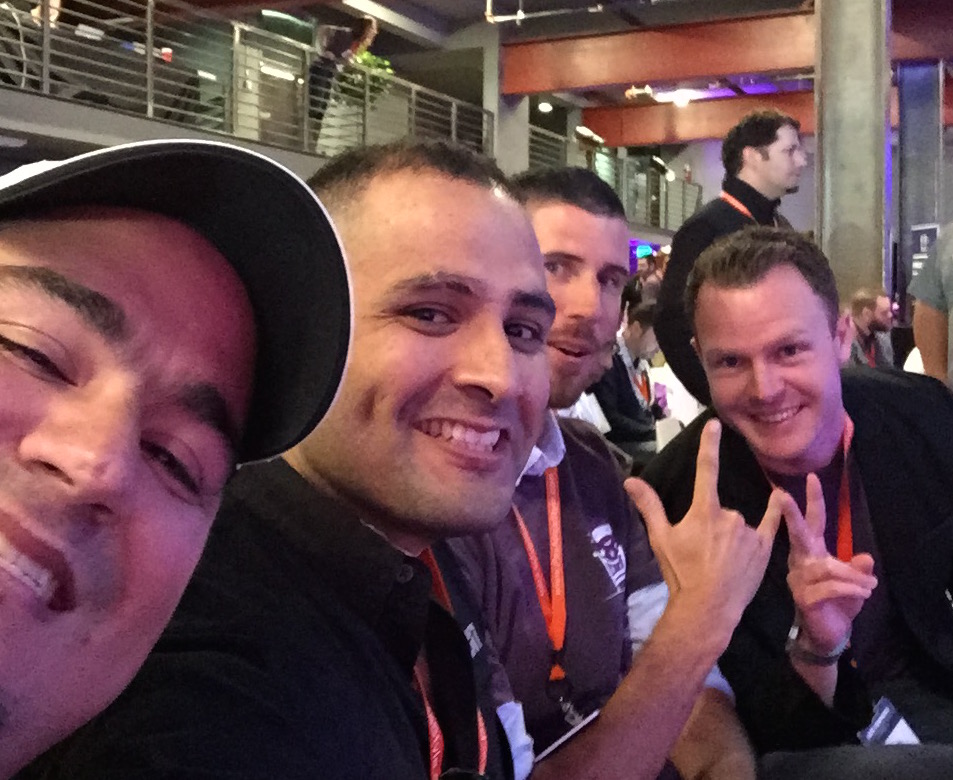 I think I was able to see Mark and Magnus exhale deeply when the first day came to a close.

The Meat and Potatoes of the Conference

I was pleasantly surprised with the content of the event. Not going to lie, I was a bit perplexed on what, or how much content, there would be to share at a full day event. They managed it well though.

There were some great speakers, and some good speakers. But if you could look past some of the quirks there were definitely some nuggets of information sprinkled throughout each presentation, something that every e-commerce website owner could walk away with.

Day to day work consumed me at times, but here is what I was able to glean from the event.

For instance, Brennan shared with us the three keys to making more money could be boiled down to:

It’s about the Call To Action and Arrows

Cyndie Shaffstall shared with us her passion for data and arrows. Did you know she A/B tests everyday? Not going to lie, I was impressed by this, I struggle A/B testing once a week, going to have to chat with her how she manage these tests.

There is a stat in there for how effective Arrows are, someone will have to remind me what that was, but don’t be shocked when you arrows in my emails.

Also learned that Drip / Nurture marketing are two different things, then again I didn’t even know Nurture existed so there’s that too.

Yoast Shared how to Get Friendly With Your Data

Every time I hear these guys talk I realize how much my SEO / SEM game sucks. I get small glimpses of what they do with their Google Analytics dashboards and I just feel a little dumber than the last time they gave a talk.

This time it was Thijs de Valk of Yoast giving the talk. These Dutchmen are class-acts and really know their SEO stuff, you’ll hopefully hear more of how they’re helping me in the coming weeks. But if you’re a WordPress user definitely check out their products, especially their WordPress SEO ones.

Not One – But Two Security Talks

While I want to stay strict about where I write specific content, I can’t help but talk to the Security talks at the event. I mean, what kind of person would I be.. :)

Side note, if you’re going to put a public questionnaire asking for votes, throttle the selection process.. ;)

It started with Rahul Deshpande, he’s from MasterCard. Have you heard of MasterCard? They’re kind of a big deal… well seems they have a cool product, Simplify.com.

The talk was the most technical of the day I think, but what do you expect from an engineer. The slides were great though.

He quickly, and efficiently, went through the entire transaction lifecycle, which was perfect to gain an appreciation for the process. He touched on the values of SSL and how they work, while touching on the very real threats of fraud.

My friend, Sam Hotchkiss founder of BruteProtect, gave a great end-user presentation on WordPress security. Covered all the major aspects I’d expect to see in a WordPress Security talks. The attack types, impacts to users, appreciating the how and why of attacks, and of course the various solutions available to the end-user.

I did kind of feel bad though towards the end, during Q&A’s, I always feel horrible when my brand comes up and / or I stand up to clarify a question – especially when it comes to cleaning a compromised website or stopping attacks. Sam was a great sport though and deflected questions when he felt it was pertinent, to that kind sir I tip my hat.

If you don’t know much about BruteProtect, I’d check them out. They were just acquired by Automattic and will likely be the bane of my existence in a few months, but sure, why not.

I did get a lot of questions around security after the talk and wanted to share with you what I do for security on my own properties. The product Sam specifically referenced built by Sucuri is known as a Website Firewall, if you have any questions don’t hesitate to ask.

That cool little site to share passwords with an expiration is called QuickForget.

Yeah – WooCommerce Can Do that

All joking aside, I learned a great deal from Chris on the powers of WooComerce and it’s various extensions. I honestly had little knowledge of it’s power, but what I now know is I need a platform.

I was fascinated, as usual, at his ability to interweave his story into the entire dialog. It started with a story of sitting in a chair and having his first waxing experience, I feel you brother. Somewhere in there it made a left, right, then another left and all I know is it ended with me understanding WooCommerce is really powerful.

By far the most engaging speaker and advocate for the WooCommerce platform. Enough so that I want to try my hand at setting up a site with it, just for the kicks of it. In the event that you didn’t know, he blogs (daily supposedly) over at ChrisLema.com and writes a little bit about eCommerce too.

You should ask him how he feels about ThemeForest.

Might I add that doing that in such a short time is an impressive accomplishment, on both accounts.

There were so many nugget of information I took away from the talk, first and fore most was to listen to your clients:

He also recommended a very interesting product, he called it Adobe Marketing Suite, pretty sure it’s the Adobe Digital Marketing Suite. I was especially keen on it’s ability to track where clients are going after they visit your website. That could be very helpful.

I also truly enjoyed his guidance and insights into how to engage, or pitch the press. That was invaluable to me. 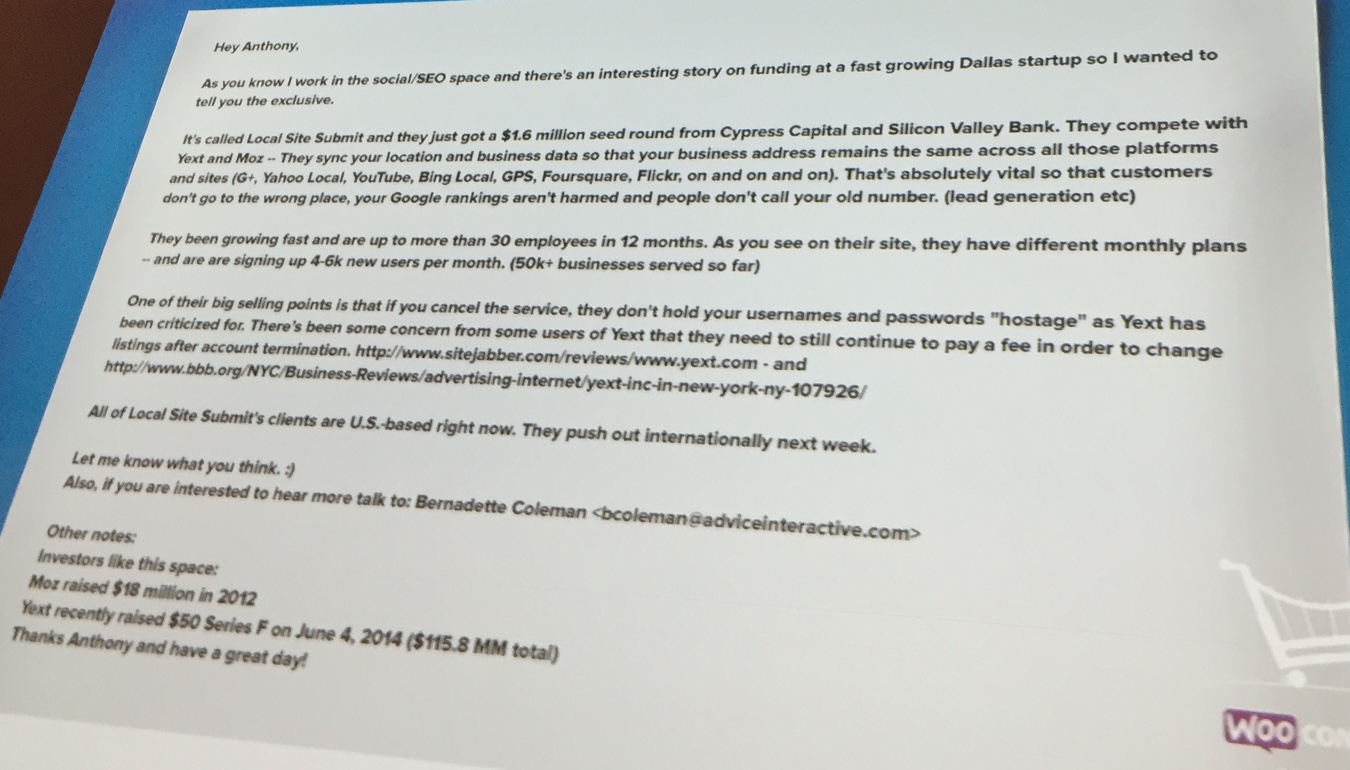 How to Engage the Press – Sample Letter

The Value of Your Audience

By the end of the day, I was pretty beat, mentally at least. Conferences do that to me, constantly being on, being alert.

In any event, I stuck out the last 15 minutes to listen to Nathan Barry talk. I was very happy I did, took a number of great pieces of information from his talk around the importance of your audience.  He Explained how he views an audience as the CHEAT CODE to business. I can appreciate this analogy, because he’s right, with an audience things become so much easier to do.

And so he shared three principles as he calls them of an audience:

Not going to lie, I was pumped with the first two, thinking to myself.. “ok ok, I see where he’s going with it..” Then he hit me with the email list, but as he explained it, it all began to make a bit more sense and to that I say. Kudos Nathan, job well done, and I’ll take it to the bank. :)

Don’t Fret – I Got My Moment

I know you were probably worried about my feelings, but when no one was looking, I took a moment to get on stage and really took it all in. 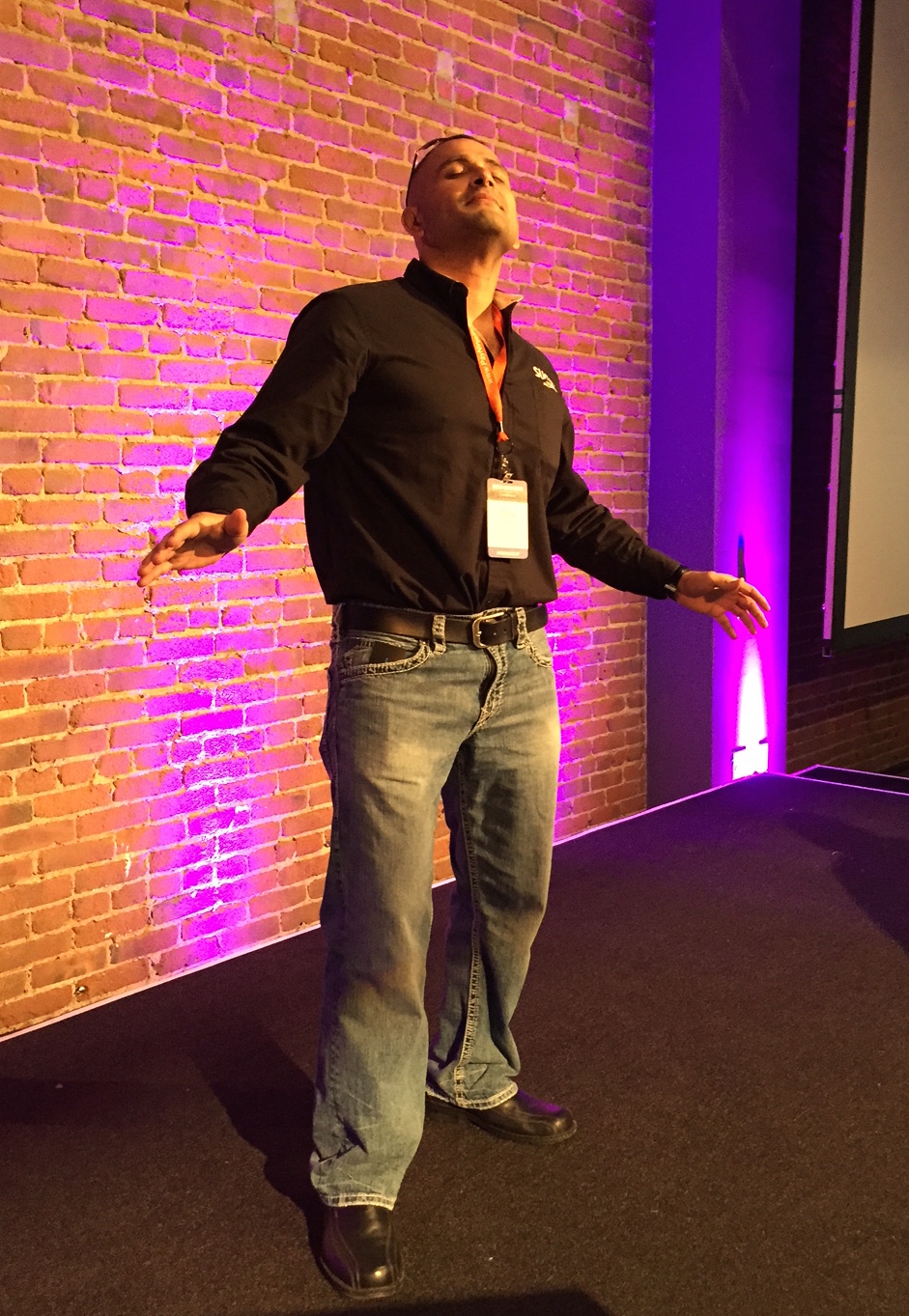 Taking it All In On Stage at WooConf

So with that, that was my day with the Woo and their awesome team!! Job well done mates!

Lastly, kudos to the MC’s, flown in from South Africa, Derrick Watts and TSB. They were on queue, mostly, but more importantly, they were playful, entertaining and kept the show flowing.